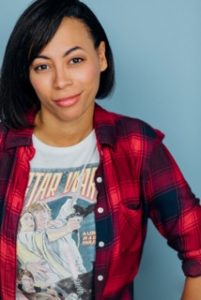 On this episode of Black And A Half, The Podcast, Manny and Silas welcome multi-ethnic actor and comedian, Samantha Rund. Samantha acted in a recent short film that Silas directed. We also have a guest co-host for this one.
About Samantha
Samantha Rund is an actor and comic who has performed all around the country. A graduate of Northwestern University, University of Washington (MFA in acting), and Second City’s Conservatory and Directing Programs, she found her way into stand up comedy and hasn’t looked back since. A versatile performer she’s appeared in countless plays, commercials, and independent films. Festival credits include: Burbank Comedy Festival, LA Diversity in Comedy Festival, Ventura Comedy Festival, Glendale Laughs Comedy Festival, and Funny Women Fest LA. Follow her on instagram @SamanthaRund for upcoming shows.

Black And A Half Podcast #45: HB Radke

Black And A Half Podcast Episode #47: Katherine Dudley