Manny and Silas sit down with Native American comedian Danny LittleJohn to talk about the Karate Kid, cultural appropriation, and Danny’s story of growing up learning about his native heritage.

Also, Black & A Half is making a short film this summer. We need your help to make it possible. Check out www.BlackAndAHalf.com/fundraiser to see how you can help. Every $5 makes a difference. 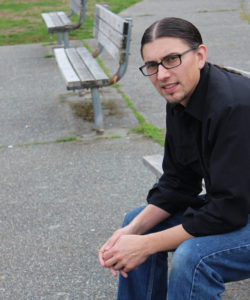 Danny Littlejohn is a US Air Force Veteran born in Wisconsin and raised in Minnesota, so his internal conflict runs deep.

Danny began writing and performing stand-up at Seattle’s Comedy Underground. Early on he won a stand-up comedy radio competition but most recently can be heard doing voices while reading bed time stories.

Danny has the ability to meld his Native American culture and his American-American culture, which gives him a unique outlook on the world and humanity. His comedy brings humor to history’s painful moments and insight to the absurdity of modern life.

Danny is based out of Seattle where he spends most of his time driving his two kids around. He can be seen writing at his kitchen table and performing in venues all over the northwest, midwest and west-west.