This week Silas got to sit down with the Cast of The Umbrella Man, a new South African action/comedy/heist film, while they were in attendance at the Toronto International Film Festival.

On Today’s episode of Black & A Half, Samantha Rund & Silas Lindenstein are joined by actor, director and film producer Ella Anderson. She is producing an upcoming film festival called the Show Me Consent! Film Festival. They also talk about the awkwardness of public fighting, consent in relationships and in teaching children consent, how the rich will make you feel invisible, and how Samantha hasn’t seen the movie Boomerang. 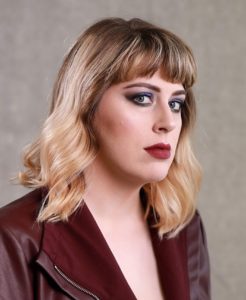 Ella is an actor, writer, filmmaker-type person. She is currently organizing the first Show Me Consent! Film Festival with the Consent Academy, which will take place on November 10th. Her first short film, Jessie’s Theory, was filmed in Budapest, Hungary in 2015, and screened internationally. Since moving to Seattle in 2016, she has made several more shorts and worked on many series, feature films, and shorts films, both in front of and behind the camera, and studied filmmaking at Shoreline Community College. She has a face. And a spirit. And she’s gonna use them.