Seattle based comic Chris Mejia stops by to chat with Manny and Silas about how ethnically ambiguous he really is, why he’s Philadelphia Eagles fan, and to give Silas some parenting advice (despite not being a parent himself). We share lots of laughs, do some building, and change lives. Listen up! 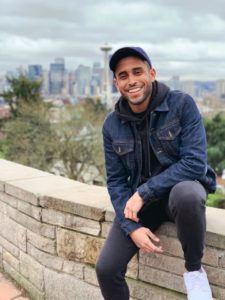 Born in Puerto Rico but raised in Florida, Chris Mejia is taking the Seattle comedy scene by storm. Chris’ comedy seamlessly blends fun pop culture observations with takes on harder subjects like living with Lupus and being a POC.

Chris has opened for national headliners such as Jak Knight, Langston Kerman and Kiry Shabazz, is a paid regular at the famous Comedy Underground and Laughs Comedy Club in Seattle, and was a Semi-Finalist for the 39th Annual Seattle International Comedy Competition, and was selected to perform in Comedyfort as a part of Treefort Music Fest. Chris is regarded as a bright up & comer as he performs all across the West Coast

Black & A Half Podcast Episode #64: Growing Up