This week on the Black and A Half podcast, hosts Manny Martin and Silas Lindenstein talk with the co-founder of Sessions of She, Missy Lacy. 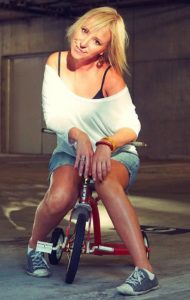 Missy Lacy is a Texas native who has made Seattle her home since 1999. Though her way of life is much more PNW than southern, she still loves sweet tea, long baths, and porch swings. For the past three years, she has been the co-host and producer of Sessions of She, a showcase of local women in visual art, comedy, and music. Her brief stint in comedy resulted in the creation of Nips-N-Tips, a comedy variety show. Missy has also emceed an assortment of events and fundraisers throughout the greater Seattle area, and is generally ready for any new challenge where she can listen to the sound of her own voice.

Black And A Half Podcast – Episode #22: Emmett Montgomery