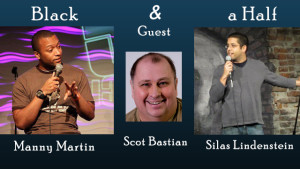 2013 is off to a great start as Black & A Half returns with its first episode of the new year. Episode #5 features Seattle playwright, author and scientist Scot Bastian, Ph.D. He sits down and talks with Manny and Silas about his recent publication of his book “Do Ya Think? Science, Science Fiction, and Skepticism

” and discusses his dream of a “science theatre.” They also discuss their favorite bad movies, The Hobbit, ghost hunting and their varying religious beliefs. Scot Bastian Ph.D. received his Ph.D. in Experimental Patholgy from the University of Colorado just prior to moving to Seattle in 1992.  He has studied molecular biology in several laboratories prior to a major move into the Seattle arts scene beginning about 12 years ago.  He has been active as an local film and stage actor, writer and producer with several local theater groups including DAMN, WARP, and the Artswest Seattle Playwright Studio.  His proudest accomplishments are mounting a stage production of “Scotapalooza: Do Ya Think” a collection of his short works, publication of the Kindle E-book Do Ya Think? Science, Science Fiction, and Skepticism

available at Amazon.com  (which will soon be available as a paperback), and publication of the paper “Regulation of the megakaryocytic glycoprotein IX promoter by the oncogenic Ets transcription factor Fli-1” in the journal “Blood.” (and, no,  he didn’t make that up—look it up.) More information is available at scotbastian.com.

Black and A Half Episode 4: Aileen Paron

Black and A Half Episode 6: CJ West