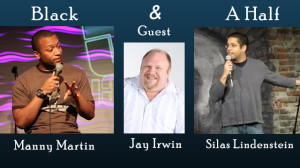 In this fabulous episode of Black & A Half, Manny and Silas sit down with actor, director, and theater reviewer Jay Irwin! Jay talks with them about being a Seattle reviewer and the complications that go with also being a local actor. They also talk extensively about the Seattle web series he is an actor in Chop Socky Boom, a hilarious comedy which just successfully funded a Kickstarter for its second season.

Jay Irwin is a Seattle native and has been working in Seattle Theater for about 20 years.  He is a local actor, director and writer.  Most recently he was seen as Edna in “Hairspray” at Seattle Musical Theatre and in Theater Schmeater’s Summer park show production of “Hansel and Gretel”.  Off stage Jay just finished directing “The Boys Next Door” for STAGEright and also writes theater reviews for BroadwayWorld.com.  Jay is also one of the actors in the local web series “Chop Socky Boom” and can also be seen in such films as “Creatures of the Pink Lagoon”, “Daylight Savings Time” and “Render Me Dead”.

Black and A Half Episode 11: Edi Zanidache and Nicholas Gyeney

Black and A Half Episode #13: Lorraine Montez