Boyd Morrison, author of the hit novels The Ark and Rogue Wave, sat down with co-hosts Manny Martin and Silas Lindenstein to talk about his recent release of his new novel in the USA The Roswell Conspiracy. They also talk odds of winning the lottery, getting into acting, traveling to the Super Earth, and bitter comics. 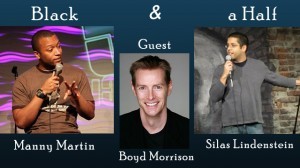 Boyd Morrison is an author, actor, engineer, and Jeopardy! champion. He started his career working on NASA’s space station project at Johnson Space Center, where he got the opportunity to fly on the Vomit Comet, the same plane used to train astronauts for zero gravity. After earning a PhD in engineering from Virginia Tech, he used his training to develop thirteen US patents at Thomson/RCA. Boyd then managed a video game testing group in Microsoft’s Xbox division before becoming a full-time writer. For non-fiction thrills, he enjoys white water rafting, skiing, scuba diving, and bungee jumping. Boyd is also a professional actor, appearing in films, commercials, and stage plays. In 2003 he fulfilled a lifelong dream and became a Jeopardy! champion. He currently lives in Seattle with his wife.

Manny Martin is a Seattle based comic who is a regular performer at the prestigious Parlor Live comedy club in Bellevue, WA. He was selected as a competitor in the 2011 Seattle International Comedy Competition.

Download Boyd’s Audiobook from Audible.com and help support Black & a Half. Two bird, one stone.

Black and A Half Episode 2: Erika Klimecky